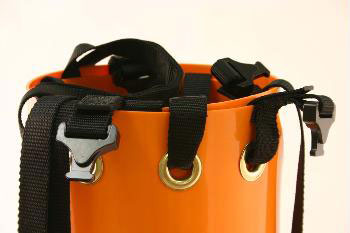 The uses of the new quick connect buckle system cuts the victim packaging time in about half.  The buckles are each rated at 3,000 pounds and require a dual action to release which provides a high level safety.

The price of the SKED® is a bit higher with the Cobra™ buckles; however, you do get everything you pay for with these buckles. They dramatically speed up the patient packaging because of the ease of using them. And, as rescuers, we're always looking for ways to evacuate our patients in a quicker and more efficient way.
END_OF_DOCUMENT_TOKEN_TO_BE_REPLACED

OK, who has not had the opportunity to use the Petzl ID? The ID is one of the most versatile bits of rescue hardware that I have in my kit. It comes in both NFPA G and L(*) rated versions and provides the closest thing to a “Jack of all Trades” capability that I can think of.

It was originally designed as an evolutionary improvement to the Petzl Stop and Gri Gri and as its name suggests, it was intended to be an “Industrial Descender” thus ID.

In very short order it became apparent that this device could do so much more than provide an auto stop capability during rappels.

The "auto stop" feature also acts as an instant progress capture, or ratchet while pulling rope through the device in the direction opposite that it was designed to control friction. This feature provides the option of using the ID as the first change of direction and ratchet in mechanical advantage systems. Granted, the bobbin of the ID is not nearly as efficient as a true pulley, but the efficiency gained by having virtually every fraction of an inch of progress captured and the ease of changing over from a haul to a lower far outweighs any efficiency loss at the bobbin.

My go-to system for situations where I need to change over from lowers to hauls, or from hauls to lowers, is the ID with the addition of a cam, a biner, and a pulley (Omni-Block), which gives me an easily assembled 3:1 Z-Rig. If I need more MA ratio, I just use a double sheave pulley at the load end and an additional single sheave pulley at the anchor end -- now I've got a 5:1 MA.

In addition to the use of the ID as the foundation of MA systems, it can also be used for short ascents, and the manufacturer is now allowing it to be used as a belay device. The ID-L still retains the quick load side plate that allows it to remain anchored while loading or unloading the rope from the device.

If you have an extra 5 minutes, watch this video where Roco Director of Training, Dennis O'Connell shares some tips about using the Petzl ID as a part of your confined space rope rescue equipment kit.

(*) Note: The 2012 edition of NFPA 1983 has changed its Light Use (L) designation to Technical Use (T).
END_OF_DOCUMENT_TOKEN_TO_BE_REPLACED 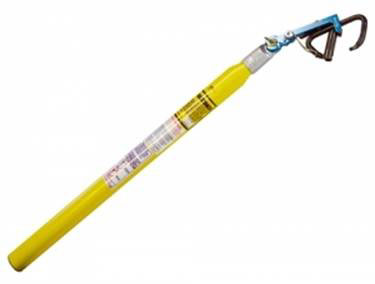 When doing our "risk vs. benefit" analysis, we always want to limit the exposure of our rescuers to the lowest level of risk practical. The SureClip™ telescopic rescue pole is one tool that can do just that. This system provides a means to make a remote attachment to a suspended or otherwise isolated victim (such as confined spaces) while minimizing risk to the rescuer.

This system is especially effective in attaching rescue systems to fallen workers that are suspended from their personal fall arrest systems. By eliminating the need to put a rescuer “on line” to make contact with the victim, this system reduces the risk to the rescue team members. The SureClip™ universal head is designed to hold a variety of auto locking carabiners in the open position and mount on a standard telescopic pole that provides from 8 to 25 feet of reach depending on the model.

For more information on this handy device, contact Roco at 800-647-7626. Or, for technical assistance, ask for Pat Furr or one of our other knowledgeable instructors.
END_OF_DOCUMENT_TOKEN_TO_BE_REPLACED

New Items for Your Rescue Toolkit "If it's been a while since you've updated your rescue equipment kit or attended a rescue class, you may not be aware of some of the newer pieces of rescue gear that not only make your job safer, but make it easier and more efficient as well. The last decade has seen an explosion of emerging technologies that have allowed the design and manufacture of some really exciting and practical equipment. In the coming weeks, we will be reviewing some of the newer gear that you may not have had the opportunity to work with. Hopefully, this will provide the stimulus for you to get out there and find out what else you may be missing out on." Pat Furr, Roco Chief Instructor/Technical Consultant


This first item is one of my personal favorites. There is a story behind it, but I will have to save that for a time when we may meet out in the field. The Omni-Block Swiveling Pulley, designed by Rock Thompson of Rock Exotica, combines some unique features that save time and weight while increasing the efficiency of virtually every type of pulley system. CMC's version of this pulley -the CMC Prusik-Minding Swivel Pulley- meets NFPA G rating. The feature of the Omni-Block that I think is as important as the built-in swivel is the "quick release side plate." This proprietary design allows the rope to be loaded andunloaded into the pulley without having to remove the pulley from the anchor. Depending on the application, this provides a new level of ease for systems incorporating temporary directional pulleys, and really reduces the chance that gear may be dropped. This is especially important for rescuers that are building systems while at height, such as with tower rescue operations.

The swivel feature has proven to be a huge improvement that eliminates the need for an additional separate swivel and additional carabiner, thus saving weight and expense. But the true benefit of the swivel, in addition to eliminating side-plate chaffing, is that any twists inadvertently built into an MA system practically spin out on their own once the system is loaded. For the rare occasions that twists do not spin out on their own, it's just a matter of quickly rotating the pulley manually to remove any twists.

Again, stay tuned, as we continue to review some of the newer pieces of rescue gear in the coming weeks.
END_OF_DOCUMENT_TOKEN_TO_BE_REPLACED Here at Roco, we have recently discovered a minor issue when the SKED stretcher is updated with Cobra buckles. The Cobra buckle replacement system is attached by girth-hitching the components into the grommets. The girth hitch takes up more room in the grommets than the sewn loop that was previously used. This makes it more difficult to pass the vertical bridle rope through the grommet holes that we’re accustomed to using.

Skedco was contacted and has approved the following alternative method (see photo). After tying a square knot at the bottom of the SKED, bring the tail ends of the rope back up and pass them through the bottom grommet hole of the handles before tying the second square knot. Note: “Handle” holes may be used with the old style buckle system.