Whenever I go out into the field for a rescue stand-by job, I always take note of the attendant. I will always talk to them in order to try and gauge this person’s level of knowledge about confined spaces in general as well as the particular entry that is being made. Unfortunately, more often than not, I discover that this worker has very little experience or very little training in confined spaces. Most of these workers tend to be the “low-man” on the work crew and seem to just be “thrown” in to that position. A lot of the facilities and contractors seem to have the attitude that anyone can be the “hole-watch.” This can be the major ingredient in a recipe for disaster.

When OSHA created the Confined Space Regulation (29 CFR 1910.146) they included a list of the “roles and responsibilities” of the Entrant, Attendant and Entry Supervisor. A cursory glance at the responsibilities of the attendant paints a picture of someone who is acutely tied to the overall safety of the operation.

These are some of the highlights of the attendant’s duties:

When you look closely at these duties, you’ll see that this is a lot more than just some “body” standing outside of the space. For example, in order to monitor the conditions inside a space, most attendants are handed a two- or four-gas air monitor and sent out to the space to “sniff” the air inside. The untrained or inexperienced “hole-watch” will likely not be aware of the numerous things that can affect the atmospheric testing results. Things such as the techniques used to calibrate the monitor, or the oxygen content of the air, or the concentration of certain gases can all skew the readings of a monitor. I have also seen, on at least two occasions, a ventilation fan being placed within a few feet of a bank of gas-powered welding machines. In one case, the carbon monoxide readings inside the space reached a high enough level to actually set off the alarms on the atmospheric monitor. These are things that unqualified workers are simply not going to know about.

Not only do the attendants out in the workforce need to be better trained, they also should be brought into the planning phase of the entry operation. The attendant should attend pre-job meetings as well as assist in the process of making the space safe for entry. In one entry that I witnessed about 10 years ago, a very well qualified attendant was present. The entry was into an underground vault that housed a large water main. The entrants were installing a new valve into the system. Because the attendant had helped shut down and isolate the space, he was familiar with the system in general. Once the repairs to the valve were completed, a call was made to re-pressurize the line in order to make sure there were no leaks present. The attendant ordered the entrants to exit the space while the pipe was brought up to pressure. The entrants argued that they needed to be there to tighten up any leaks that might develop, but the attendant was adamant that they leave the space. As the pressure in the line climbed higher, it ruptured and the entire vault filled with water in about 30 seconds. It happened so fast that no amount of pre-rigging for rescue would have saved the two entrants.

A well-qualified attendant can have a definite impact on the entire project. It is unfortunate that many times they are looked at as just some person standing outside the space – instead of a key component in the overall safety of the entry operation. 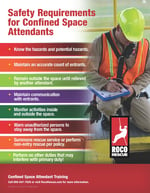