For the first time in the state’s history, a Washington employer will go to jail for the death of one of his employees due to trench safety violations.

The incident occurred back in 2016 when a worker was crushed to death under more than 6,000 pounds of dirt when an 8- to 10-foot-deep trench caved in on top of him at a West Seattle home. Washington state OSHA regulations require trenches over 4-feet deep to be shored (the federal OSHA requirement is 5 feet.) 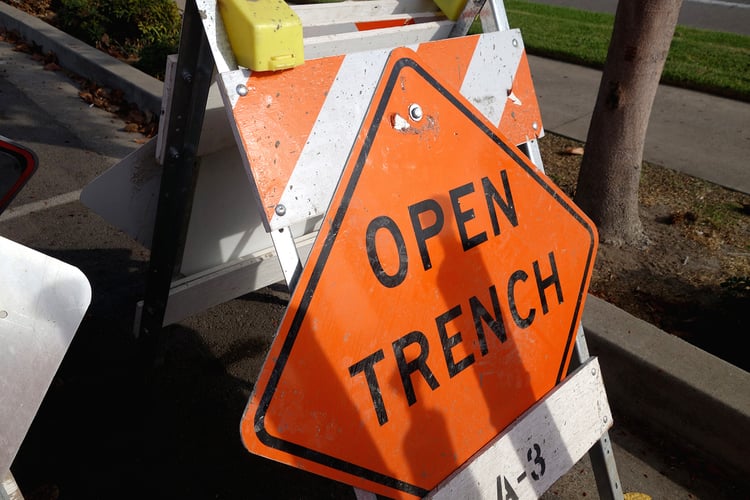 The trench in question had been dug for over a week prior. During the time it was open, there were several days of heavy rain. The trench was only shored on two sides and only part way up. It was dug right next to the house and a sidewalk, weakening the support for both of them. The dirt taken out of the trench was piled right next to it. The trench dirt had been previously loosened from earlier digging. The worker was given a reciprocating saw to use in the trench which vibrated it and further loosened the dirt. Each one of these things made the trench more likely to collapse. There was also no ladder or other safe way to get out quickly.

Violations included: not protecting workers from cave-in; failure to have an accident-prevention program for excavation work; no ladder or other safe way to enter and exit the trench; sidewalks and structures were not supported to protect employees; dirt and other materials were less than 2 feet from the edge of the excavation; and there were no daily inspections of the changing soil conditions.

Trench collapses are well known hazards and easy to prevent if federal or state OSHA standards are followed. Yet every month, workers die (or in a few cases are rescued) from unsafe trenches in this country. Federal OSHA requires every trench over 5-feet deep to be protected with a trench box or some other form of shoring or sloping. The problem is that trench walls can collapse in seconds and you generally can’t dig someone out of a deep collapsed trench. One cubic meter of soil weighs around 3,000 pounds — the size of a small automobile. When an automobile falls on your chest, you are unlikely to survive. Even the attempt to dig someone out is fraught with peril: collapsed trenches can continue to collapse, endangering the rescuers.

Two years after the worker’s death, King County Prosecutor’s Office charged the company owner with felony second-degree manslaughter and violation of labor safety regulation for alleged negligence that caused the death. It was the first time a Washington employer had faced felony manslaughter charges for a workplace death. According to L&I Director Joel Sacks, “There are times when a monetary penalty isn’t enough.”

However, instead of the manslaughter charge, the prosecutor’s office later backed down and reached a settlement with the owner, where he pleaded guilty to the crime of Attempted Reckless Endangerment, a simple misdemeanor and agreed to serve 45 days in jail. The company must also pay a fine of $100,000 (in addition to the original L&I fine) and serve probation for 18 months.

The owner is the first Washington state employer to serve time in jail for a workplace death, but he may not be the last. Five people were charged with manslaughter after the January 2020 trench collapse at a wind farm facility in Lewis County that killed a 24-year-old worker. A Lewis County Superior Court judge later dismissed all charges against four of the five codefendants. Only one of the individuals will face one count of first-degree manslaughter.

According to officials, the prospect of jail time can be a powerful deterrent for employers who routinely cut corners on workplace safety. However, only 110 worker death cases have been criminally prosecuted under the Occupational Safety and Health Act since 1970, with defendants serving a total of at least 112 months in jail.

Local prosecutors have been more active, to include:

This article was originally written by Jordan Barab of Confined Space.
https://jordanbarab.com/confinedspace/2022/03/15/trench-jail-time/

If you’re concerned that your rescue service may not be adequately prepared, give us a call or check out these resources for more information on how to keep you and your personnel safe around trenches.