During a recent snowstorm, the Woodbury Fire Department responded to an initial call of a car down an embankment. However, upon arrival, things became quite a bit more complicated. Department personnel were faced with a situation that pushed their training limits, and also created some valuable lessons learned.

What were your thoughts initially when responding to the scene of this accident?

Chief Burke: We initially received a report of a vehicle that had gone over a guardrail and slid down an embankment. We were unsure of the distance the car had traveled off the roadway or the slope of the embankment. Our priority when we arrived would be getting to the vehicle and assessing the conditions of the occupants.

Lt. Kauer: There was significant snowfall occurring, road conditions were pretty bad at the time. Getting to the occupants to provide treatment and protection from the elements was really all we had to go on with the information we had.

What did you find when you arrived on scene and performed your initial assessment?

Chief Burke: When we arrived on scene, we could not locate the vehicle initially. We could hear a horn going off in the distance, so we knew we were in the right location. With the assistance of the police department, members on scene were able to locate the vehicle after a brief search of the area. The vehicle, a standard passenger car, had traveled approximately 60 feet down the embankment and rolled onto its roof partially submerged in a creek. 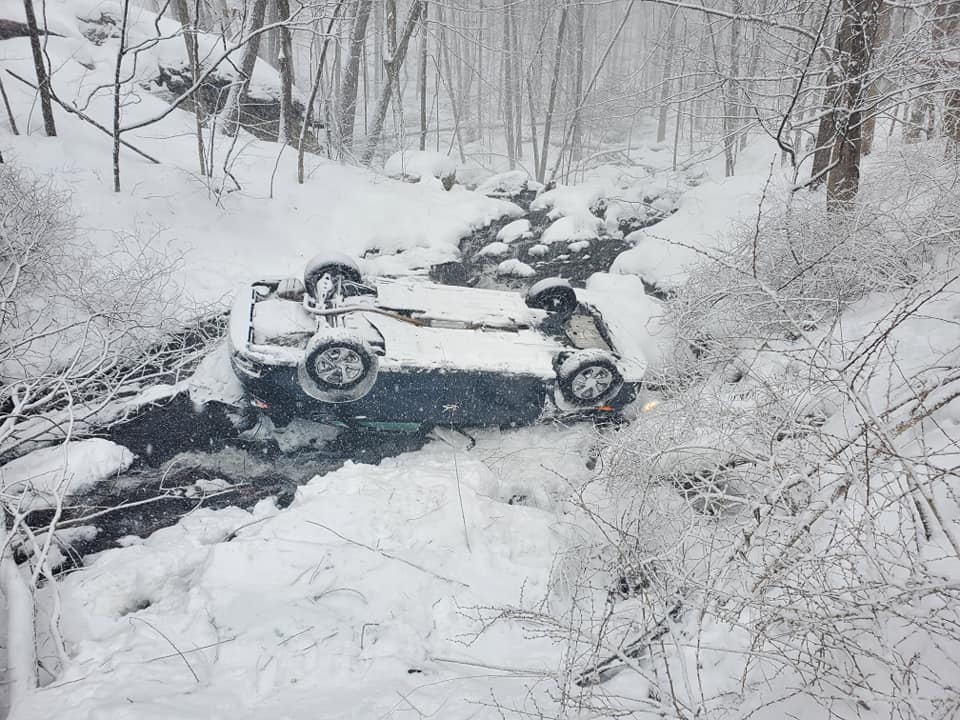 Lt. Kauer: Chief Burke was already on scene when I arrived and had made his way down to the vehicle to begin assessing the situation. I remained topside to direct incoming personnel and provide any support needed below.

Can you describe what developed as you assessed the scene further?

Chief Burke: The police officers and I started making our way closer to the vehicle, there was approximately 16-18 inches of snow that had accumulated on the slope impeding our travel. When we got to the vehicle’s location, we found there was a 6–8-foot sheer rock face at the bottom of the slope. The two police officers slid down the face to the vehicle, I remained at the top of the face and started relaying information to Lt. Kauer and advised him that technical rescue would be needed to get the occupants topside.

Lt. Kauer: When the Chief contacted me over the radio and advised technical rescue would be required, I started to assess the surrounding area and planning where a safe work zone could be established and identifying any hazards that could complicate our rescue efforts. One of the biggest concerns I had was the amount of manpower that would be needed, and determining how many department personnel would be responding. Being a volunteer department, and given the time of day the incident occurred, it was not a guarantee that we would have sufficient manpower available to execute the rescue in a timely manner. I was hesitant to ask the Chief to request assistance from surrounding departments and deplete their manpower unnecessarily; they face the same issues we do as volunteers. Knowing that rescue efforts would require the use of technical rescue skills, I was also working to set up the rope systems that would be necessary for getting the patient to the roadway.

What strategy was used to successfully complete the rescue? What developed during the process?

Chief Burke: PD made initial contact with the single occupant in the vehicle, and I remained on top of the rock face to coordinate operation with personnel at the top of the slope. We were fortunate that the patient did not appear to be severely entrapped or injured. The officers were able to breach the passenger door window and remove the occupant who had suffered bruising and several lacerations. The patient was initially non-ambulatory but was able to gain mobility as the assessment continued. We still had two significant obstacles in front of us, the 60-foot snow-covered slope and the 8-foot sheer rock face which would have to be traversed during the rescue. I contacted Lt. Kauer and advised of developments, I called for a stokes basket to package and transport the patient up the slope while the team located on top of the slope continued to prepare for the rescue. 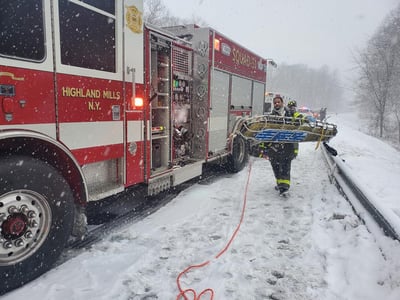 Lt. Kauer: When the Chief updated me on the situation below, I started to formulate a more definitive rescue plan. Our manpower levels on scene were sufficient, which was a major relief. However, our department does not have a dedicated technical rescue team. The arriving personnel were not trained in technical rope rescue and would be limited in the skills they could provide. Being the only rescue technician on scene, I started to give our personnel basic tasks to assist in setting up the rope system we would utilize when bringing the patient up the slope. Being that we were on a roadway, we would need to use the apparatus as our anchoring point. Having personnel inexperienced in rope rescue on scene meant that on-the-fly training would be necessary to successfully complete the rescue in a timely manner. The training covered basic anchoring and rigging principles, construction of the rope system that we would be using for the haul, and team positions once we were ready to initiate the retrieval.

Once the system was in place, and personnel were confident in their assignments, we sent personnel to assist with transporting the patient up the slope.

Chief Burke: I continued to work with PD in developing a plan to bring the patient up the sheer face to the base of the slope. Even though the face was only 8 feet, it was a very steep ascent. Given the conditions, that would make traversing it difficult – even with the assistance of a rope system. This would require us to bring not only the patient, but also the two police officers up the face as well. This would add significant time to the rescue and delay getting the patient up to the road surface. Thankfully, we were able to locate an area about 15 feet downstream that had a significantly flatter slope. The now ambulatory patient was able to move to the bottom of the slope with the assistance of PD. Once the patient had made it to this point, I instructed our members who had arrived with the stokes basket to start packaging the patient and prepare for travel up the slope.

Lt. Kauer: Once the patient was secured, and our personnel were in position, we utilized our hauling system to assist in moving the patient up the slope. Due to the hazardous conditions created by inclement weather, the system not only provided assistance in bringing the patient to the road surface, but it also provided the rescue team members a means of safety as they maneuvered the difficult terrain. 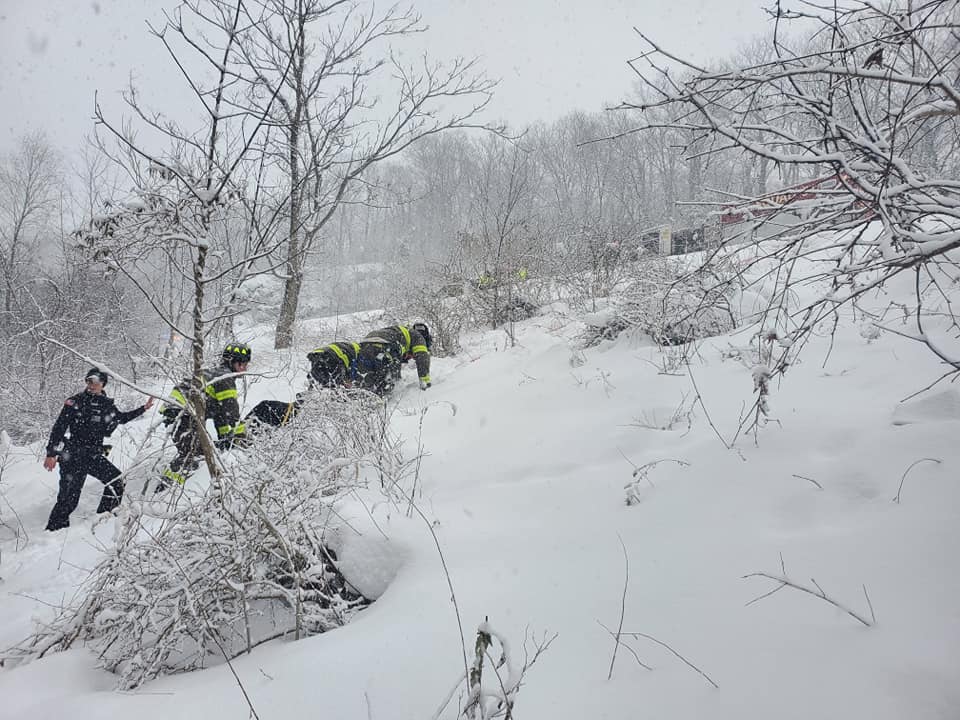 Continuous communication was critical in completing the rescue. We were able to get the patient to the top of the slope and transferred to medical personnel for transport.

What unexpected challenges did you face during the rescue?

Chief Burke: For me, the combination of poor weather conditions, snow already built up on the slope, and a sheer face of rock creating an obstacle really compounded the situation. Had we not been able to locate an area with a flatter face, it would have increased the difficulty of the rescue exponentially.

Lt. Kauer: Deteriorating weather conditions during the operation really created some problems. Also, we were operating on an active roadway during the initial stages of the rescue. With road conditions as they were, there was a major safety concern. Until PD was able to get the roadway shut down, we were working with an abundance of caution. Not being able to fully focus on the rescue tasks due to safety concerns can impact your time on scene significantly.

What are some lessons learned your department took away from the rescue?

Chief Burke: We were fortunate to have Lt. Kauer, who is a Roco Chief Instructor, on scene to direct rescue operations at the top of the slope. It would have been very beneficial to have additional resources trained in rope rescue on an initial alarm automatic response. It would have allowed us to have a fully trained rescue team available in a more timely manner. If Lt. Kauer had not been on scene, our own fire personnel would not have been able to perform the rescue as effectively and efficiently as we did.

Lt. Kauer: Know your district and any areas that can present scenarios that are out of the ordinary. Preplan any areas you identify and know how to be prepared for them. Have your team members familiar with basic anchoring and mechanical advantage principles. These types of low-angle rescues do not require a vast amount of skill or equipment to be successful. Practice the basics and make sure your team members are proficient in these skills.

What should other departments take into consideration to ensure they are prepared for these types of events?

Chief Burke: Evaluate your capabilities as a department, look at all the possible scenarios where you may be needed and be honest with yourself. You must ask, “are we able to do what is required if the time comes” In our case, it would be extremely difficult to have multiple members trained as rope rescue technicians. Having mutual aid on auto-response with departments who have these resources readily available is essential.

Lt. Kauer: Never think that these things will not happen in your district. Departments are continuously called to perform outside of standard fire-related duties. Not everyone has to be a technician when you look at rope rescue or other technical disciplines needed for response. Train with your department on the basics, have department members work on simple core skills and develop a good base for technical rescue.