Rescuing from the Bullpen

It is FINALLY that time of year. The sight of freshly mown Kentucky Blue Grass, the smell of $9.00 hot dogs, the taste of $13.00 draft beer. It is that magical moment when America’s pastime – silence football apologist – will once again take its rightful spot at the top of all things important in the sports world.

The sport of baseball has a deep-rooted history and possesses within itself many variables that can affect the outcome of the game. However, there is one component of the game that can be the most decisive reason that a game is won or lost. Let me introduce you to the bullpen pitcher.

It is odd that the person who will be placed in this decisive role does not have the luxury of getting in a rhythm and working out the nervous feelings and rusty movements as the game develops. No, unlike the rest of the players who have built up to a critical moment and are absorbed in the action, the bullpen pitcher must come in cold. Placed in control of a situation that someone else created, he is expected to perform at the highest level to save his team from an undesirable outcome.

Does this sound familiar to you? Welcome to the lives of every rescuer.

Rescue personnel do not have the luxury of scheduling when they will be called on to perform in very high-stress situations that demand the maximum from their skills to succeed.

What compounds the situation further is the fact that the outcome resulting from the rescuer’s performance is not winning or losing a game, but the lives of individuals. The ability of a rescuer to be inserted in a situation with less than desirable conditions and perform their skills in ways that achieve the desired results requires a unique person and a very high level of training.

Both of these crafts start out the same.

First, it takes an exceptional person to fill these roles and accept the responsibility, and pressure, that each bring.

Both begin by learning all the skills and knowledge they can and develop their abilities through repetition and further understanding of their trade until they are ready to perform. Armed, one literally and one figuratively, with everything they need to be successful, they set out down their chosen path to achieve success and become a notable ally of good. The problem that they both soon recognize is that most of their time is spent waiting, wanting to use the skills that they have spent time perfecting, but stuck wondering when they would get their chance. For rescuers, not having to respond to an incident that requires the use of their skills is a good thing.

A bullpen pitcher may be called in to stop the “bleeding” when the game is on the line. But the bleeding that happens when a rescuer is called involves a human life.

People who have a calling for these roles did not dedicate their time and effort just to have a good seat in front of the action that is occurring. They want to be in the moment as it is happening, to contribute to gaining the best outcome possible. Neither of these roles have the opportunity to continuously use their skills in the instance they were designed for. But when called upon to execute these skills in a time of need, they must be able to perform with precise talents and in a proficient fashion. Lack of performance from one may get you sent down to the minors, or just out of a job period. The other, however, potentially faces a far worse reality.

Rescuers do not have the benefit of having an “off day” when lives are at stake.

You can’t just go to the bullpen for a new reliever to take your place, you are the last line of defense between someone’s life and serious, sometimes tragic, results.

If you have been in the rescue business long enough for the newness to have worn off your initial training, you know that the knowledge and skills it takes to be a part of a successful rescue team are highly perishable.

Rescue knowledge and skill must be continuously practiced and studied in order to be at the very top of your game.

Just as a reliever who is expected to paint the corners and produce double-play balls, the rescuer must dedicate themselves to working on their required craft to maintain, and improve, their ability to perform.

A successful bullpen pitcher is a necessity for success, but they are a singular component of the team. To perform at the highest level, the bullpen pitcher needs many components. A good batterymate and solid defense are imperative. A good manager and scouting report give the reliever the direction and information they need to execute. Again, the similarity between the two crafts shows here. A rescuer is an essential component of a successful rescue team. However, a dedicated rescuer who works to be at the top of their rescue skills still must rely on others for success. A team of proficient rescuers who also stay on top of their skills provide the needed defense. A good team leader calling the right pitch serves as the rescuers’ batterymate. Preplanning not only a potential space where rescue may be performed, but all of the variables that may cause unforeseen hazards or impede the rescue efforts serves as a rescuer’s scouting report. A good emergency manager is another critical piece. A team cannot be successful without the funds and time to become proficient. The emergency manager is the piece that fights for the ability to provide the team the opportunity to practice their craft. Annual rescue training is great for “demonstrating and documenting” individual skills proficiency as required in OSHA 1910.146 PRCS, but how confident are you in your skills when you perform them once a year? Continuous training is crucial for the success of any rescue team.

Both trades will face various situations throughout their career that produce another factor that can impact the outcome of a situation, it is called stress. Lack of preparedness and performance will drastically impact this factor and will assuredly make a bad situation worse. Coming in with 2 outs and nobody on in the 7th to protect a lead will create significantly less stress than coming in with the bases loaded in the bottom of the 9th no outs with a 1 run lead. The same applies to a rescuer responding to a worker with a sprained ankle who can’t climb a ladder in a non-hazardous environment. This situation will produce minimal stress for a rescue team that is not quite up to par with their skills and preparedness.

However, the same team attempting to rescue three individuals who are unconscious in a confined space with a hazardous atmosphere will experience an exponentially increased amount of stress, which will certainly play a part in the outcome. Both of these situations require skills to be performed, but a team that is not capable in their skills and rescue decision-making process can potentially cause more harm than good for the unfortunate souls needing rescuers to save them from a perilous situation.

The bottom line is this, rescue teams must train often and with a purpose to ensure that they are ready at a moment’s notice, prepared to face the direst of situations, and capable of achieving the best possible outcome. This includes individual rescuers as well as the team working as a unit. No one wants to bear the scars of a rescue gone wrong. Rescuers want to be the ones that made the difference and let someone get home to their family safely.

So, when the skipper comes out in the 9th and calls for the lefty out of the pen, what rescue team will you be? One that is a pitch away from being sent down to the minors or worse sent packing because of their performance? Or the ace reliever who puts the team on his shoulders in game 7 to bring home the Commissioner’s Trophy? Play Ball! 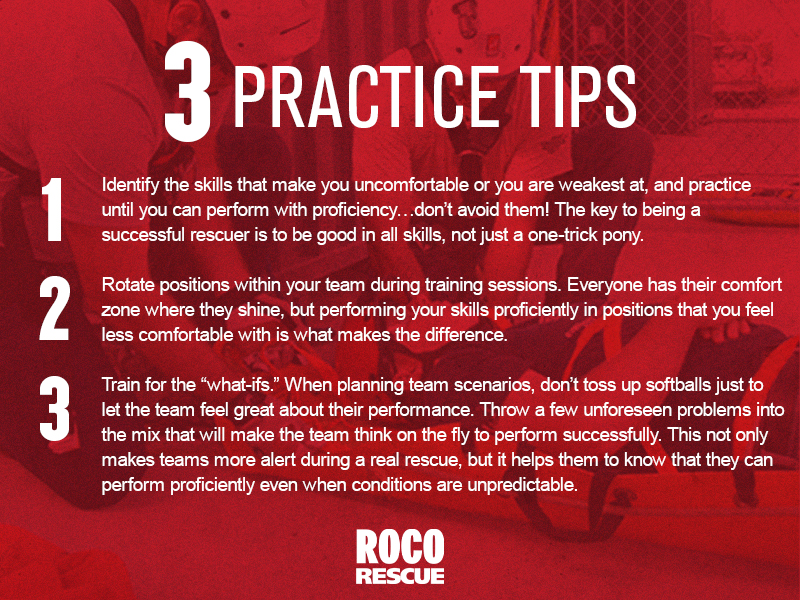 Check out our Quick Drills for some in-house practice, or join us for one of our Compliance Rescue Refreshers™.