Lock-Out/Tag-Out: What Rescuers Need to Know

The concept of Lock-Out/Tag-Out is a great one and it works. As rescuers, however, we have to take the common industrial application and expand it to ensure that the rescue scene is safe and that we are controlling hazards at the point of contact with the victim or in a space where something has gone very wrong.

What Does OSHA Say?

Although commonly referred to as the “Lock-out/Tag-out” (LOTO) standard, the actual title of 1910.147 is “The Control of Hazardous Energy.” This title probably better describes its true purpose – and there's no doubt that the understanding of this concept has saved many lives and prevented countless injuries. Prior to work, potential sources of hazardous energy must be identified and controlled. As responders, we do not have the luxury of studying blueprints and schematics to identify how to isolate the hazard. In fact, we’re most often responding to incidents where LOTO turned out to be ineffective or was improperly used. 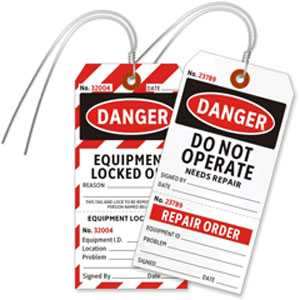 Standard LOTO is usually defined in a work planning and control process or a job safety analysis. Days, weeks, and even months are spent planning and assessing cause and effect to ensure a safe work environment. During an actual emergency, rescuers have only minutes to assess and determine how to “make the scene safe.” This safety mindset serves to protect both the rescuer(s) and the victim(s) from additional harm following an incident.

NOTE: While LOTO tags are permissible by OSHA, they are not commonly used as you must prove that a tag is at least as effective as a physical lock – something that would be hard to ensure.

We’ve found that if you ask different people to define LOTO and who is responsible for performing it, you will get a variety of answers. OSHA 29 CFR 1910.147(b) has a very narrow and specific definition of who can perform lock-out or tag-out operations. That definition does not include rescuers; and there is good reason for that. OSHA defines two types of persons in regard to LOTO; “authorized employees” and “affected employees.”

Translation: A person that the employer says has the systems or mechanical knowledge and authority to safely lockout/tagout a machine or space.

Translation: A person who has to work in an area where LOTO is in place. (Sounds like a rescuer to me.)

According to an OSHA clarification letter1, an affected employee is one who does not perform service or maintenance work on the machine or a piece of equipment and does not implement the LOTO system procedural elements. Rather, the affected employee's job responsibilities include operating the machine or equipment or performing other work in an area where the service or maintenance work is being performed.

There is good reason for these prohibitions on applying Lock-out/Tag-out. Improperly performed LOTO can be just as dangerous, if not more so, than no LOTO at all. Allowing LOTO to be performed by personnel who are not familiar with the processes and equipment increases the chances of improper lock-out. As rescuers, we rarely (if ever) have the kind of institutional knowledge to perform true LOTO of a process or environment.

If the reason for the rescue is something other than an exposure to a hazardous energy source, and LOTO has already been performed, the rescuers should walk through and verify the "authorized employees'" LOTO and ensure no changes are made to the system.

If LOTO was performed improperly or has failed and is causing the emergency, then rescuers can lock-out the equipment as they see fit or as the rescue needs dictate. The control of hazardous energy is part of making the area safe for rescue operations, but doing so without understanding the bigger picture can be dangerous.  Whatever actions are taken should be completed with the coordination of a facility representative who understands where or what you are working with.

From a rescuer’s viewpoint, our definition and options for effective LOTO needs to include other equipment and techniques that provide a safe area for rescue operations and prevent further harm to the victim. This includes equipment that is used every day in the municipal rescue world that may not typically be found in an industrial facility. This includes equipment such as hydraulic spreaders and high-pressure air bags. Even simple tools, such as metal wedges, can be used to isolate and protect the hand or arm of a victim trapped in a piece of machinery. The key is to review your current capabilities and identify what may be needed prior to an incident occurring. 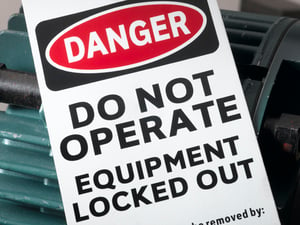 Machine entrapment rescues are another all too common situation in which responders need to isolate the area at the point of contact with the patient to prevent further movement. RESCUERS BEWARE – Another huge consideration for rescuers is stored energy! Sometimes what sounds like a simple solution (such as turning off a machine) can do more harm IF the machine normally recycles before coming to a resting position. OSHA identifies these hazards and provides a pretty good list of examples to be aware of when responding. It includes stored or residual energy in capacitors, springs, elevated machine members, rotating flywheels, hydraulic systems, and air, gas, steam, or water pressure, etc. Rescuers need equipment and techniques to control, restrain, dissipate, and immobilize these hazards.

Municipal and industrial rescuers get called to a wide variety of rescues – each with its own unique problems. As we know, the number of ways people can get themselves in harm’s way is unlimited! In all entrapment incidents, however, it is essential that we protect both the victim and ourselves from further injury and limit our exposure to the hazards that are present. In every incident, rescuers must first identify the hazards and try to eliminate or control them in every way possible.

Every year, OSHA issues its “Top 10 Most Frequently Cited Standards” list. While the order of the list is different from year to year, it is generally still comprised of the same 10 standards year after year. LOTO, the control of Hazardous Energy (29 CFR 1910.147), consistently makes the list; and, for 2021, it was no different. For 2021, the LOTO standard landed as the 6th most frequently cited standard in the industry.

Incident: An Ohio aluminum parts manufacturer with a history of safety violations now faces penalties for 38 safety and health violations and a proposed $1 million fine following an investigation into the death of a 43-year-old worker struck by a machine's barrier door on March 30, 2021.

OSHA alleges that the company allowed employees to bypass guarding mechanisms designed to protect employees from the barrier door closing on them and that a malfunction in the door's optic control existed prior to the deadly incident. The worker was loading a part into the machine when the barrier door closed on his head.

OSHA's investigation identified problems with machine guarding and a lack of protective procedures – commonly known as lockout/tagout – throughout the facility. OSHA claims that the company was aware of these problems and failed to address them adequately.

Incident: Another case of LOTO “gone bad” occurred during a Roco CSRT stand-by job at a local industrial plant. After LOTO had supposedly been performed, one of our team members decided to test it by pushing the “Start” button on a hyper bar in a tank – it turned “ON!” Further investigation revealed that electrical work had been done in the area and the fuse lock-out was moved to another box adjacent to its original location. No one had notified the workers or changed the written protocol. Workers were locking out the wrong circuit! Had this been a rescue, how would rescuers control the hazard without knowing where the problem was with the LOTO?

It is clear that rescuers need to look deeper into their technique toolbox for creative options to isolate energy sources in order to protect themselves as well as the victim. And, this doesn’t only apply to municipal rescuers. Industrial rescue teams are very likely to be called when an emergency like this occurs. In order to be proactive and prepared, take the time in advance to evaluate your response capabilities as well as that of local responders in your immediate area. Every minute is critical for that person trapped or injured.